6 Couloirs in the Baldwin Cirque

From the top of the wineglass couloir last weekend, Ben and I had seen the Baldwin cirque couloirs which looked great. Like the Wineglass, they are also North facing which meant that despite another week of 80 degree weather in Bishop, they were probably powder just like the Wineglass. There were 5 couloirs mentioned in the guidebook in that cirque and a lot more that we could see. In general, I think it is uncivilized to sleep in the woods and I like to do things in a day, but we decided to go camping anyway because there were a lot of couloirs to be skied and we had the whole weekend. We left LA around 6pm on Friday and after battling traffic to Palmdale, we got to the Mcgee creek trailhead around 11:30pm.

4 of the 6 couloirs we skied.
Credit: Cody Finke
Image Lightbox

We were moving by 6am, hiking with heavy packs up the McGee trail. After a couple miles on the trail peeled off and booted up the far side of the creek coming down from the Baldwin cirque. There was a small use trial and several sets of footprints to follow. I guess we were not the only people who got stoked by powder. After trudging through some snow we reached the lower cirque where the snow was finally deep enough to skin. several kick turns through breakable crust took us to the upper cirque where we unloaded our camping gear under a rock. In the book there were 4 north facing couloirs that we were hoping were powder and a 5th couloir that was Southeast facing that we were hoping was corn snow. We decided to start from the left and move right skiing 3 couloirs the first day and then leaving the last two couloirs for Sunday. 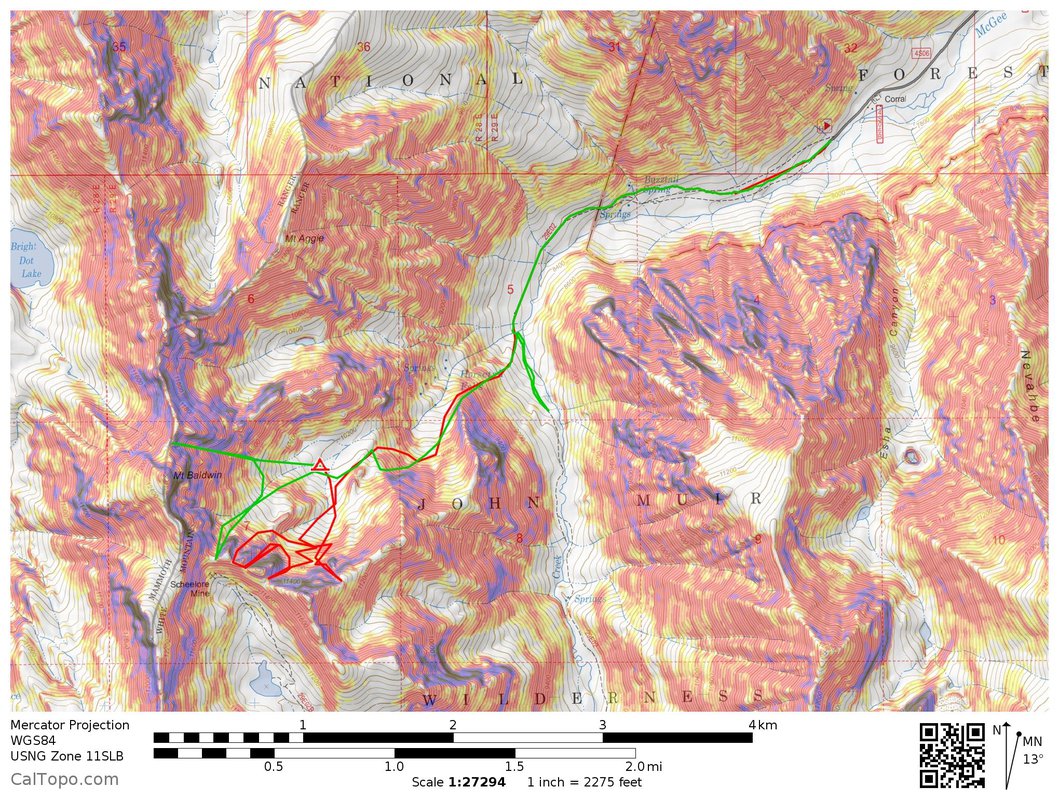 As we entered the bowl below the north facing couloirs, the snow turned from crust to soft and we knew we were in for powder! Rad! Getting up the couloirs was an easy mix of booting and skinning. The back four couloirs all top out on the ridge that separates the Baldwin massif from the basin below Red and White mountain so it was possible to boot the same couloir and then walk over rocks on the ridge to the adjacent couloir.

After skiing the second couloir, we recycled out bootpack and booted back up it and over to the third couloir. The third couloir was the best of them all. A more consistent pitch and the best snow. After the high of skiing the final couloir, it was only 2:30pm and so far all of the couloirs that we skied had had tracks in them, so we decided to ski another couloir that was NE facing and not in the book. We were pretty hungry at that point but the love of powder propelled us upward. A sluggish ascent delivered us to the top of a new ridge. The snow in this 4th couloir was excellent.

Back at our gear, we skinned up and walked to the base of the SE couloir to set up camp. Like a genius, Ben had brought hot chocolate, and I had got some free snacks from Patagonia at outdoor retailer so we ate well which helped with how horrible snow camping is.

We woke up lazily and 6 and stuck everything in the tent and headed up the SE couloir. Using skeats skin cleats attached to our skis we were able to skin up a large chunk of the icy SE facing couloir that otherwise we would have had to boot. Eventually we transitioned to booting The snow wasn't soft by the time we got to the top so we waited 45 min. A storm was coming in and wind was picking up so even though the snow wasn't soft we decided to ski down. Ben made some hero turns on top but I decided not to try that. We made icy turns down the rest of the couloir, not much fun. From the base of the couloir, we headed for the last of the 5 couloirs that was in the guidebook. This couloir was shallower and I thought we would be able to skin all the way up it. About three quarters of the way up I ran into some sneaky ice and I lost a ski stamping down on it. I hadn't given myself leashes yet so my ski slid away from me as I arrested my slide with my whippets. Left with only one ski, booting the rest of the couloir was a bit easier as my load was lighter, but the ski down wasn't as smooth. I was able to take descent powder turns in one direction and pretty sloppy turns in the other. Anyway, it was still a blast in good snow and I made it down to my ski as ben came screaming past on good snow.

We ended up skiing all the 5 couloirs in the book plus a bonus couloir all were 35-40 degrees and five of six were powder and one was atrocious!

We got back to the tent which had nearly blown away as I had decided that the weight in it was enough to keep it from blowing away, and I had almost been wrong. Clouds were now overheard and it was really breezing up so we moved fast to pack our bags and head down. An uneventful egress delivered us back to our car, the burger barn in bishop, and then beers in the hot ditch with a person from Inyokern who knew a lot about local abandoned mines.